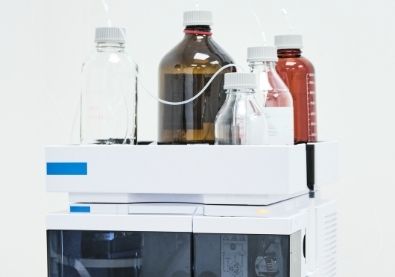 LC grade acetonitrile is well suited for HPLC-UV assays, as it has the lowest absorbance of UV wavelengths. It also has low viscosity, high elution strength, and miscibility in water.

LC Grade solvents for both acetonitrile and methanol are manufactured with the removal of UV absorbing impurities. Mass Spectrometry Grade solvents such as acetonitrile and methanol meet all the requirements of modern LC-MS ionization methods (ESI/APCI – positive and negative mode). Due to their low level of ionic background and low ion suppression, these solvents ensure high reproducibility and high ionization efficiency.

Chromatography supplies, such as columns, experience pressure that varies depending on the type and mixture ratio of organic solvents. The pressure for methanol increases when mixed with water, but not so much for acetonitrile. Consequently, given the same flow rate, acetonitrile-based solutions apply less pressure to the column.

Acetonitrile has a higher elution strength than methanol for reversed-phase chromatography. Therefore, one can expect shorter analyte retention for equal proportions of organic to water.

For compounds such as salicylic acid (phenol with carboxyl or methoxy group in the ortho position), acetonitrile can cause significant tailing, which could be suppressed by using methanol. This is caused by differences in the way the mobile phases relate to the mutual absorption between the silica surfaces and target components, due to the chemical properties of the organic solvent molecules.

Acetonitrile is produced as a byproduct of acrylonitrile, which is a common component in plastics. Since 2008, the chromatography industry has dealt with a worldwide shortage of acetonitrile in which the availability has diminished, and prices have climbed. To combat this, many labs have switched to using methanol.

When comparing acetonitrile to methanol for reverse phase chromatography, each solvent has its own advantages, such as methanol’s availability and lower cost, or acetonitrile’s elution strength.